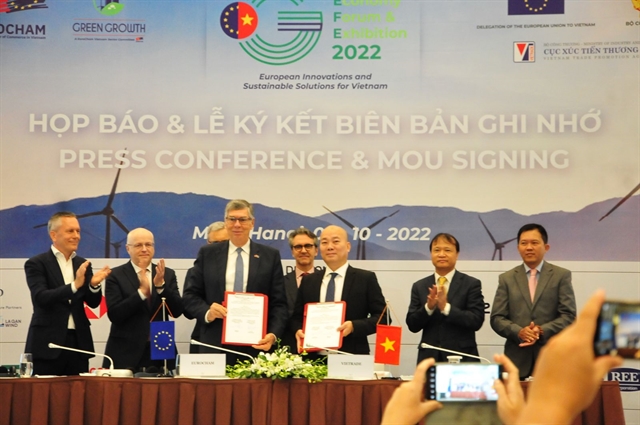 HÀ NỘI — The Green Economy Forum & Exhibition (GEFE) 2022 will promote investments and deepen the commercial cooperation between Europe and Việt Nam, according to Deputy Minister of Industry and Trade Đỗ Thắng Hải.

Hải made the remarks at a press conference on October 3, which announced the GEFE 2022 to be held in late November.

“GEFE 2022 will display advanced technologies, high-quality products and green initiatives of both European and Vietnamese firms,” he revealed.

Alain Cany, Chairman of the European Chambers of Commerce (EuroCham), said GEFE 2022 would take place from November 28 to 30 in HCM City, whose primary goal is to bring the best European innovations and sustainable solutions to Việt Nam to help the country meet its ambitious COP26 commitments and national green growth strategy for 2021-2030.

The three-day event will comprise two parts, a conference and an exhibition. The former involves talks on sustainable development, energy policies, funding, knowledge-sharing initiatives and climate risk management whereas the latter features over 150 pavilions on an area of roughly 5,000 sqm.

“Besides, we will have different bilateral discussions and workshops on subjects such as energy resources, green financing, waste treatment, and circular development,” he added.

He also said green transition would be impossible without B2B and B2G cooperation, technology transfer, funding, and knowledge-sharing. As the transition is the only way forward, parties would need to provide all resources to fill current gaps.

Christoph Prommersberger, Deputy Head of Mission, Embassy of the Kingdom of the Netherlands to Việt Nam, underlined the development of the “carrot and stick” in European policies to support green transition globally.

He said “the carrot” represents billions of euros of climate finance waiting for lending opportunities in Việt Nam. Meanwhile, “the stick” involves the carbon border adjustment mechanism, which taxes imports that are produced with large carbon emissions.

“That means potentially Việt Nam’s exports to Europe in certain sectors would be taxed higher,” he said.

He also said new responsible business conduct regulations, largely based on OECD guidelines, were under development and would probably come in two to three years.

He believed it was time for Việt Nam to start preparing for the regulations and make sure Vietnamese exports continue to meet European market requirements.

Giorgio Aliberti, Ambassador of the European Union to Việt Nam, underscored GEFE 2022 as a major event this year to promote green technologies and green solutions.

“It’s the right time for Việt Nam to look at new technologies to operate green transition and to green the economy to fight against climate change,” he said.

He noted that circular models could bring a net saving of US$600 billion for EU firms by 2030 and create 600,000 jobs. As such, green transition would be a big opportunity for Việt Nam in terms of employment.

The Vietnam Trade Promotion Agency (Vietrade), under the Ministry of Industry and Trade, also signed a memorandum of understanding with EuroCham on 3 October for co-organising GEFE 2022, and strengthening links between Vietnamese and European business communities.

As part of its agreement with EuroCham, Vietrade will provide support in recruiting Vietnamese companies and exhibitors for GEFE 2022 and its Vietnamese National Pavilion.  —VNS