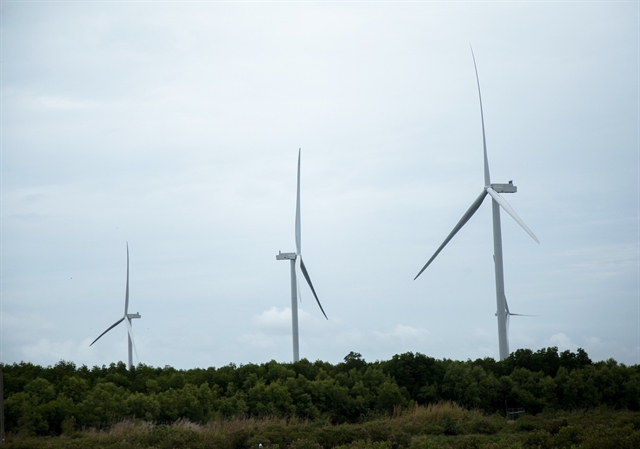 Could you summarise global trends in renewable energy development?

More than 70 countries including Việt Nam have now set net-zero emissions targets by 2050. Realising these commitments requires a transition from fossil fuels to renewable energy sources at a scale and speed unprecedented in human history.

Countries such in G7 and Australia have committed to end bilateral international financing of coal power plants and phase out their support for fossil fuels. International investors have also divested from coal power and are looking for investing substantially in renewable energy.

In Việt Nam, there was already evidence of this when a foreign firm decided to withdraw from the Vĩnh Tân 3 coal-fired power plant project due to increasing pressure from investors against fossil fuel investment.

In 2021, global renewable capacity broke a new record, increasing by 6 per cent to almost 295GW, despite supply-chain challenges spurred by the pandemic. In 2022, renewable capacity is expected to increase by over 8 per cent to reach almost 320GW, thanks to strong policy support from the EU, China, and Latin America.

The share of renewables will continue to expand as they are set to provide almost all (95 per cent) of the growth in global power capacity through 2026, with solar providing more than half of that increase.

In response to the ongoing energy crisis, we see that many countries are intent on tackling climate change and improving their energy security through the use of renewables and improved energy efficiency.

UNDP has provided some technical support to Việt Nam in energy development. How do you assess Việt Nam’s transition progress to efficient and renewable energies?

Việt Nam has made remarkable progress in expanding its capacity to generate renewable energy and is leading the energy transition in Southeast Asia in terms of installed solar and wind power capacity.

Renewable energy will help Việt Nam to ensure energy security. Since 2015, Việt Nam has increasingly relied on imported coal to meet the demand for power, and it is projected that coal and gas imports will increase significantly in the future while the prices of imported fossil fuels will be highly influenced by market fluctuations.

Over just five years, Việt Nam scaled-up solar energy capacity from almost nothing in 2017 to more than 16,000MW in 2022, far exceeding national targets.

Việt Nam also has enviable wind power potential, particularly for offshore wind, with more than 3,200km of coastline. In 2022 and 2023, 20 wind power projects will be installed in Sóc Trăng alone.

Challenges remain for Việt Nam to develop policies, technology, and financing to promote the development of clean energy projects as the country moves towards carbon neutrality. Do you have any recommendations to help the country address these challenges?

Countries around the world are facing similar challenges, leading the Intergovernmental Panel on Climate Change (IPCC) in its recent report to urge countries to accelerate enabling conditions through policies that can drive up the adoption of available renewable energy technologies.

In Việt Nam, despite progress made with the unprecedented boom in renewable energy investments, transmission lines connecting solar and wind energy to the national grid do not yet have sufficient capacity to cope with spikes in supply.

Though the Feed-in-Tariff (FiT) was initially an effective mechanism to improve the competitiveness of renewable technologies, it has also led to uneven and unsustainable development of solar energy in Việt Nam. Meanwhile, the price policy that will replace the FiT is not yet in place.

Power purchase agreements (PPA) have not yet met international standards. There is also significant potential to pursue Direct Power Purchase Agreements (DPPA) driven by the private sector, which helps facilitate private renewable energy generation. DPPAs are currently being piloted and could have a significant impact if scaled.

In addition, Việt Nam’s expansion in hard-to-abate sectors such as steel, chemicals, and cement will need to be offset by looking ahead and investing now in technologies such as green hydrogen and carbon capture, utilisation, and storage (CCUS).

Most important is establishing a plan to decommission coal power plants. The PDP8 draft energy plan to phase out unabated coal power in the 2040s is a promising start. UNDP encourages further action to reduce coal dependence.

Việt Nam has been receiving comparatively large amounts of international assistance for a just energy transition and continues to have opportunities. However, the amounts are likely to remain limited compared to overall investment needs.

One of the important factors in helping the country fulfil its energy development and climate change adaptation goals is international support. Does UNDP have any plan to support or cooperate with Việt Nam in this field until 2030?

UNDP is supporting Việt Nam to accelerate a just energy transition and adapt to climate change through policy support, studies, and projects including:

Providing technical analysis for aligning new and revised policies with net-zero emissions targets across the Power Development Plan 8, the Green Growth Strategy, and the development of the National Climate Change Strategy, including assessment of international and domestic finance opportunities and ways to enhance private sector contributions to achieve the targets.

Supporting the Ministry of Natural Resources and Environment to update the Nationally Determined Contribution (NDC) and strengthen the national Monitoring Reporting and Verification (MRV) system to improve the greenhouse gas inventory to meet requirements under the Paris Agreement.

To support and accelerate a just energy transition and particularly the target of net-zero emissions by 2050 and phasing out coal in the 2040s, UNDP is:

Greening transport by promoting electric vehicles (EVs) and developing the ecosystem for their operation in urban settings to help reduce fossil fuel consumption.